What a difference a few months can make.  At last year’s conclusion and this year’s onset, only high-risk health workers were being vaccinated, the nation faced another spike in COVID cases, job growth had turned negative.

But late last year, as the nation’s recovery began to sputter, with retail sales slumping and layoffs accelerating, Congress passed a roughly $900 billion stimulus package.  The result is that after a tough start to 2021, the economy quickly regained its momentum as federal dollars coursed through the economy.  Policymakers have injected even more stimulus since, and the economic outlook over the next year has arguably never been brighter as the federal government pumps up the economy while vaccinations rocket to nearly 5 million per day.

By March, the nation was adding jobs rapidly again after losing about 300,000 of them in December.  According to the initial estimate from the Bureau of Labor Statistics, the nation added more than 900,000 jobs in March.  Unemployment dipped to 6.0 percent.

That number doesn’t tell us nearly as much about the employment situation as usual.  To a meaningful extent, the decline in unemployment since April 2020 has occurred because many would-be job seekers have dropped out of America’s labor market altogether.  Since February 2020, when the recession began, America’s labor force has shrunk by nearly 4 million.  Were those workers added to the ranks of jobseekers, America’s official rate of unemployment would be above 8 percent. 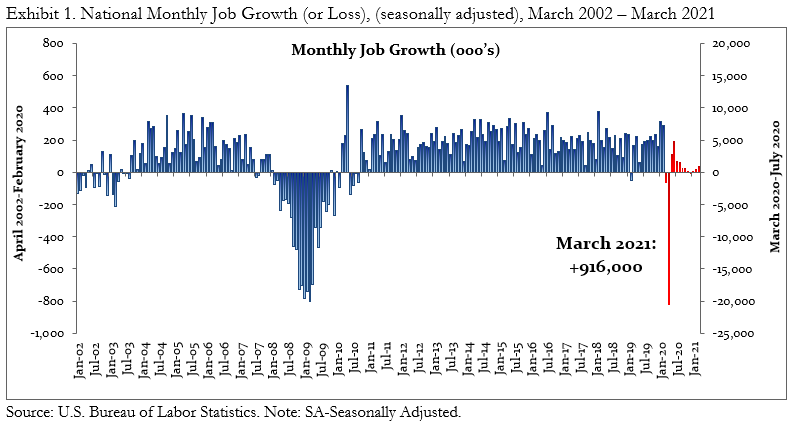 In this regard, the labor force participation rate is rather useful.  This statistic monitors the percentage of adults who are presently either working or looking for work.  Before the pandemic, the rate hovered between 62 and 63 percent.  It plummeted to 60.2 percent in April of last year as jobs were lost and schools moved toward remote instruction. 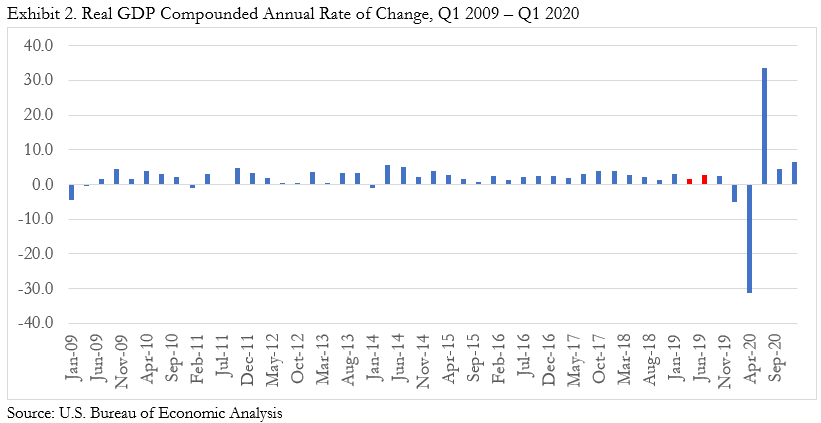 Many of the people who left the workforce were women (mothers).  That said, many fathers also left the workforce to tend to children learning from home.  The diminution in workforce participation has been concentrated among those with lower educational attainment.  According to available data, the labor force participation rate among those with a high school degree as their highest form of educational attainment is 3.8 percentage points below its pre-pandemic level.  The rate for those with at least a bachelor’s degree is 1.8 percentage points lower.  Those with college degrees are far more likely to work in occupational categories that suffered less job loss and wherein many have been able to supply their services remotely.

Since the pandemic began, the federal government has injected about $5 trillion into the economy.  There’s more to come.  The Biden Administration is formulating a plan to invest another $2 trillion+ in the economy in the form of an infrastructure plan and nearly that into a plan focused on families.  This is remarkable since the economy is already zooming ahead.  GDP expanded 6.4 percent during 2021’s initial quarter according to the initial estimate from the Bureau of Economic Analysis.

The infrastructure plan includes provisions that would “build, preserve, and retrofit more than two million homes and commercial buildings, modernize our nation’s schools and childcare facilities, and upgrade veterans’ hospitals and federal buildings.”  There will also be spending on roads, bridges, tunnels, airports, and seaports.

Funding for the infrastructure plan would come partially from an increase in corporate taxes.  The Tax Cuts and Jobs Act of 2017 reduced the corporate tax rate to a flat 21 percent for all income earned.  If Biden’s Made in America corporate tax plan is passed, it would increase that rate to 28 percent.  In theory, the tax increase would capture $2 trillion in corporate profits held overseas.  White House estimates state that the increase would pay for the infrastructure plan in 15 years and would then go towards paying down the deficit during ensuing periods.

The growth that will be observed over the next several months will be unlike anything most of us have ever observed unless one is from Dubai.  With the economy reopening and fueled by stimulus and accumulated savings, the consumer sector stands to be especially strong.  That will produce rapid job growth in precisely the segments that have been hit hardest during the downturn, including leisure and hospitality, retail, and physicians’ and dental offices.

The addition of millions of jobs during the months to come will further bolster spending power.  Meanwhile, Washington policymakers are determined to continue to stimulate the economy.  As the balance of the world begins to manifest its momentum, the U.S. export sector will add more intensely to the momentum.

The growth to come, while generally positive, is only part of the story.  Inflationary pressures are already becoming apparent.  Longer-term interest rates have been generally edging higher in recent months.  Should inflation continue to expand, interest rates would rise further, and that could meaningfully dampen the housing boom presently raging across much of the nation.  It is conceivable that one day America will be associated with faltering stimulus, higher inflation, loftier interest rates and federal debt service, and higher taxes.  But for now, the outlook is very positive.

Please remember that past performance may not be indicative of future results.  Different types of investments involve varying degrees of risk, and there can be no assurance that the future performance of any specific investment, investment strategy, or product (including the investments and/or investment strategies recommended or undertaken by Lowe Wealth Advisors, LLC (“Lowe”), or any non-investment related content, made reference to directly or indirectly in this newsletter will be profitable, equal any corresponding indicated historical performance level(s), be suitable for your portfolio or individual situation, or prove successful.  Due to various factors, including changing market conditions and/or applicable laws, the content may no longer be reflective of current opinions or positions. Moreover, you should not assume that any discussion or information contained in this newsletter serves as the receipt of, or as a substitute for, personalized investment advice from Lowe.  To the extent that a reader has any questions regarding the applicability of any specific issue discussed above to his/her individual situation, he/she is encouraged to consult with the professional advisor of his/her choosing.  Lowe is neither a law firm, nor a certified public accounting firm, and no portion of the newsletter content should be construed as legal or accounting advice.  A copy of Lowe’s current written disclosure Brochure discussing our advisory services and fees is available upon request. Please Note: If you are a Lowe client, please remember to contact Lowe, in writing, if there are any changes in your personal/financial situation or investment objectives for the purpose of reviewing/evaluating/revising our previous recommendations and/or services, or if you would like to impose, add, or to modify any reasonable restrictions to our investment advisory services. Lowe shall continue to rely on the accuracy of information that you have provided.

We use cookies to ensure that we give you the best experience on our website. If you continue to use this site we will assume that you are happy with it.Ok